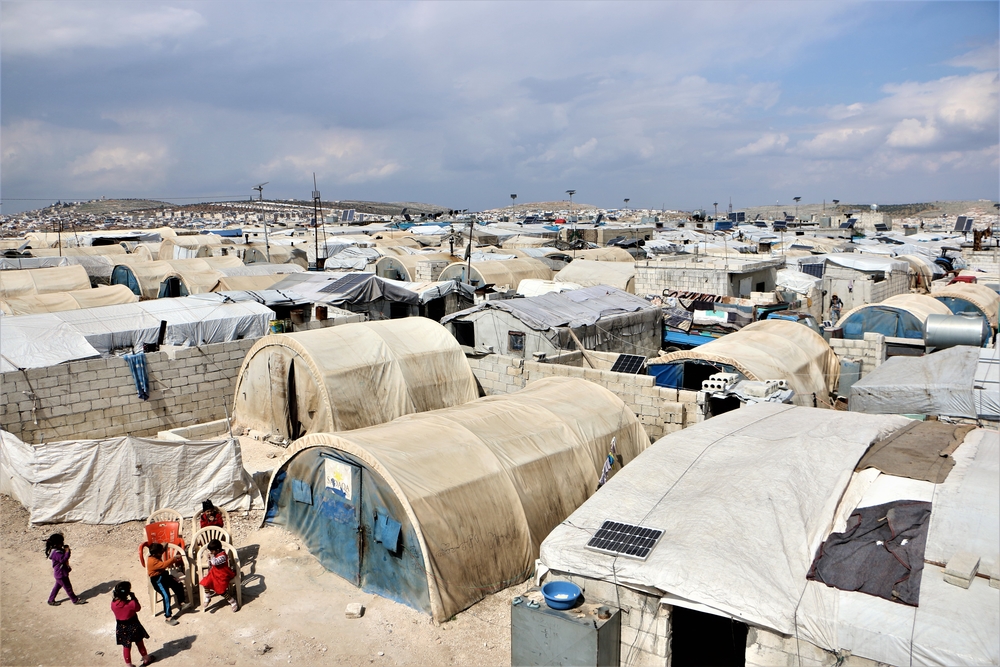 As the numbers of COVID-19 in northwest Syria have been steadily increasing since July, local authorities have imposed a limited lockdown on the 6th of November to help slow down the transmission.

In the camps, people have to adapt to the new situation although they are still facing an economic crisis and the fighting hasn’t stopped. “With coronavirus, I know leaving home is risky, but I don’t have any choice,” says Kamal Adwan, aged 25, who lives in a camp for displaced people in northwest Syria. “As scary as the virus is, I can’t leave my family without food.”

For Kamal – the sole breadwinner for a family of 15 – the economic repercussions of the pandemic are more life-threatening than the pandemic itself. Before COVID-19 and the subsequent restrictions, Kamal used to find work on construction sites whenever the opportunity arose. Although it was never a stable job, he did his best to support his family.

Today, Kamal lives with his parents and 12 other family members in two adjacent tents in Abu Dali camp. They fled their hometown in rural Hama province in February 2019 after it came under heavy shelling.

By 4 November, the cases of COVID-19 have reached 7,059 cases. The third of November recorded the highest number of cases so far, with 524 in a single day. The three labs in the area currently processing tests are mostly doing less than 1,000 tests a day in total.

“When we first heard of coronavirus, we thought it was a rumour, or nothing more than seasonal flu,” says Kamal. “Now I know that this virus is no joke and it is directly affecting me.”

Many of the 16,000 residents of Abu Dali camp live with their extended families in crowded tents, some as small as six square metres. Healthcare in the camp is provided by Médecins Sans Frontières (MSF), whose teams work in a number of camps for displaced people across northwest Syria. More than two million people have been displaced from their homes over recent years and are now living in Idlib governorate.

In the overcrowded camps, the risk of COVID-19 transmission is high and self-isolation is difficult, if not impossible. Regular handwashing is also a challenge, as many people rely on water collected from shared tanks.

“My main concern is to get as far away as possible from anyone with suspected COVID-19,” says Kamal. “The camp is overcrowded and hiding from the virus has been challenging.”

Umm Firas, aged 39, shares Kamal’s predicament. She is the breadwinner for her family, after her husband was severely injured in an airstrike on their house more than a year ago, leaving him half paralysed and unable to work.

Only a few months ago, Umm Firas supported her husband and their nine children by renovating people’s tents within the camp and mending their mattresses and sheets. Now she has to balance the family’s need for an income against the risks of going out to work.

“I stopped going out of my tent to protect myself and my family,” she says. “But sometimes I am obliged to go and look for work. I am always scared I’ll catch the virus and spread it to my children, but what else can I do?”

Of Umm Firas’ nine children, just three daughters used to go to school. Schools across northwest Syria had to take measures to reduce the risks of transmission: students were asked to wear face

masks, which can be bought from local pharmacies for one Turkish lira, but this is out of the reach of many parents.

“The teacher used to ask my daughters to put masks on, but what do you expect them to say?” says Umm Firas. “I have never bought a mask – I can barely buy bread. When I have the choice, I always go for bread.”

Unable to afford face masks, some parents stopped sending their children to school. In some schools, teachers were trying to find alternative solutions, such as allowing students to use old pieces of cloth to cover their faces.

Now with the lockdown planned for a week, all places where crowds gather like public markets, universities and schools are closed and small local grocery stores, pharmacies and clinics remain open.

Forty-year-old Umm Ahmed is also finding it difficult to cope. Originally from Qalaat Al-Madiq, in Hama province, Umm Ahmed fled her home with her husband and seven children in 2012 and found refuge in Qah, in Idlib province, for two years. In 2014, they moved from Qah to Deir Hassan, where they have been living ever since. The nine of them live in a one-room tent, including her husband, who is bedridden and cannot work.

Umm Ahmed was the family’s only breadwinner, working as a hygiene assistant in one of the hospitals in Ad-Dana district, northwest Syria, but was forced to stop when she suffered of kidney failures a few months ago.

The camp where Umm Ahmed lives hosts around 50 families, all of whom share a single water tank and three toilet blocks. “It’s impossible to wash your hands regularly in the camp without putting yourself at risk,” she says.

As the economic situation for Umm Ahmed’s family worsens, she has found it increasingly difficult to afford soap and detergents to protect herself and her family from COVID-19. Recently she received a hygiene kit, containing soap, detergents and buckets, from MSF, which has been distributing hygiene kits to displaced families across northwest Syria since April.

“There are still things we can do to avoid catching the virus,” says Umm Ahmed. “I’ve stopped going out as much as I can, and I avoid being around other people. It keeps me and my family safe. But I can’t ban my children from playing outside with the other kids. They’re young, they need to play, and our tent is very small. I understand it’s a risk, but how can I stop them?”

Even prior to the lockdown, daily life has become much more expensive and many people are struggling to keep their heads above water. “Earlier in October, markets, mosques and schools were closed for some days, but they were open again soon after,” says Hassan, MSF logistics manager. “Lots of people rely on markets to make a living, so they can’t afford to be out of business for a long period of time.”

After years of conflict, the healthcare system in northwest Syria is also facing challenges coping with the COVID-19 outbreak. There are just nine dedicated COVID-19 hospitals for a population of around four million, plus 36 isolation and treatment centres providing basic care for patients with mild symptoms.

“Idlib province has become like a huge prison: people can’t move south or north, and they’re stuck here in the middle,” says Hassan. “They think that the virus will reach them and their families at

some point. They only hope it won’t get to them all at once. The healthcare system simply couldn’t manage to treat a lot of COVID-19 patients at once.”

Our response to the coronavirus COVID-19 pandemic