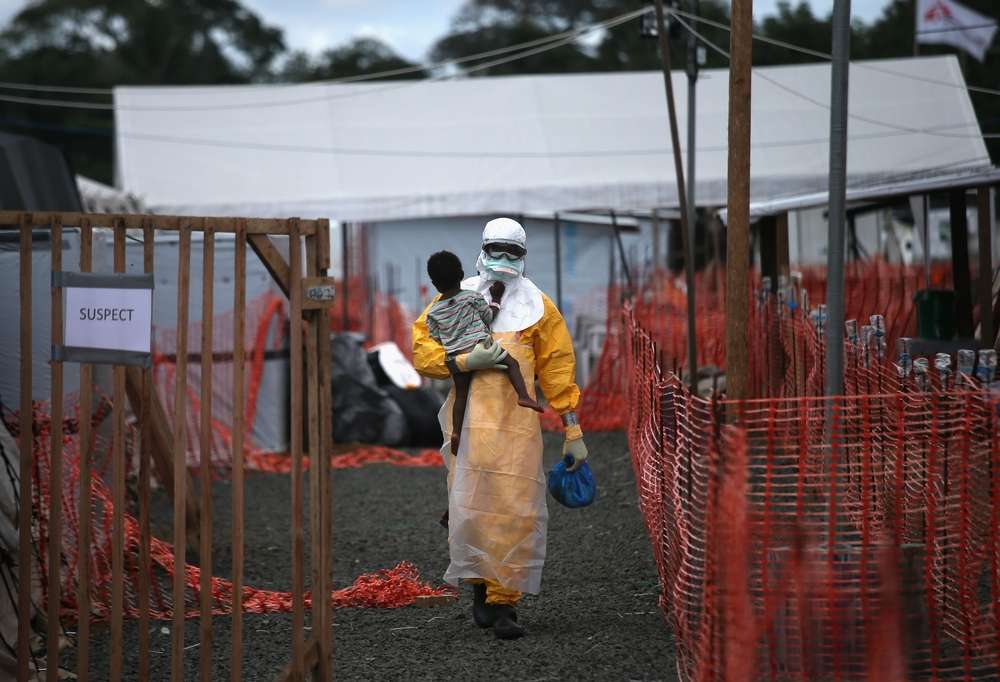 Ebola: Pushed to the limit and beyond - MSF report

PRESS RELEASE: MSF releases a critical analysis of the global Ebola response one year into the deadliest outbreak in history

The international medical humanitarian organisation Médecins Sans Frontières/Doctors Without Borders (MSF) today releases a critical analysis of the Ebola epidemic in West Africa over the past year, revealing the shortcomings of the global response to the crisis and warning that the outbreak, despite an overall decline in cases, is not yet over.

The report, Pushed to the limit and beyond, is based on interviews with dozens of MSF staff involved in the organisation’s Ebola intervention.

It describes MSF’s early warnings one year ago about cases of Ebola spreading in Guinea, the initial denial by governments of the affected countries, and the unprecedented steps that MSF was forced to take in the face of global inaction as the outbreak engulfed neighbouring states.

Over the past year, more than 1,300 MSF international staff and 4,000 local staff have been deployed in West Africa, where they cared for nearly 5,000 confirmed Ebola patients.

A critical look at the Ebola response

“Today we share our initial reflections and take a critical look at both MSF’s response and the wider global response to the deadliest Ebola outbreak in history,” says Dr Joanne Liu, MSF international president.

“The Ebola epidemic proved to be an exceptional event that exposed the reality of how inefficient and slow health and aid systems are to respond to emergencies.”

The report details the effects of the several months-long “global coalition of inaction,” during which the virus spread wildly, leading MSF to issue a rare call for the mobilisation of international civilian and military medical assets with biohazard capacity.

By the end of August, MSF’s ELWA3 centre in Monrovia was overwhelmed with patients. Staff were forced to turn away visibly ill people from the front gate, in the full knowledge that they would likely return to their communities and infect others.

View a fullscreen version of the timeline

Ebola outbreak is a “tragic failure”

“The Ebola outbreak has often been described as a perfect storm: a cross-border epidemic in countries with weak public health systems that had never seen Ebola before,” says Christopher Stokes, MSF general director.

“Yet this is too convenient an explanation. For the Ebola outbreak to spiral this far out of control required many institutions to fail. And they did, with tragic and avoidable consequences.”

The report also lays out the challenges MSF faced over the past year and the difficult choices made in the absence of available treatment and sufficient resources.

While MSF’s Ebola experience is limited to a relatively small group of experts, it should have mobilised more resources earlier.

Facing an exceptionally aggressive epidemic and a weak international response, MSF teams focused on damage control. Unable to do everything, compromises had to be made between the competing priorities of patient care, surveillance, safe burials and outreach activities, amongst others.

“At the most severe periods of the outbreak, MSF teams were unable to admit more patients or provide the best possible care,” says Dr Liu.

“This was extremely painful for an organisation of volunteer medics, leading to heated exchanges and tensions within MSF.”

MSF’s process of reflection is underway, as it seeks to learn lessons that can be applied to future outbreaks, while documenting and analysing its patient data to examine the multiple factors that can contribute to Ebola mortality. Crucially, a global strategy to sustain research and development for Ebola vaccines, treatments and diagnostic tools must be developed.

A significant challenge remains ahead. To declare an end to the outbreak, every single person in contact with someone infected with Ebola must be identified.

There is no room for mistakes or complacency; the number of cases weekly is still higher than in any previous outbreak, and overall cases have not significantly declined since late January.

John Moore/Getty Images
An MSF health worker in protective clothing carries a child suspected of having Ebola in the MSF management centre on 5 October 2014 in Paynesville, Liberia.

In Guinea, patient numbers are again rising. In Sierra Leone, many people are presenting with the virus who were not previously on lists of known Ebola contacts.

Liberia is currently on the countdown to zero cases, but remains at risk while the virus lives on in neighbouring countries.

“The trauma of Ebola has left people distrustful of health facilities, has left health workers demoralised and fearful of resuming services, and has left communities bereaved, impoverished and suspicious,” the report says.

In the three worst affected countries, nearly 500 health workers have lost their lives in the past year, a disastrous blow to an already serious shortfall of staff before the Ebola crisis hit.

It is urgent that access to health services is restored as a first step towards rebuilding functional health systems in the region.

“Global failures have been brutally exposed in this epidemic and thousands of people have paid for it with their lives. It is to everyone’s benefit that lessons be learned from this outbreak, from the weakness of health systems in developing countries, to the paralysis and sluggishness of international aid,” the report concludes.