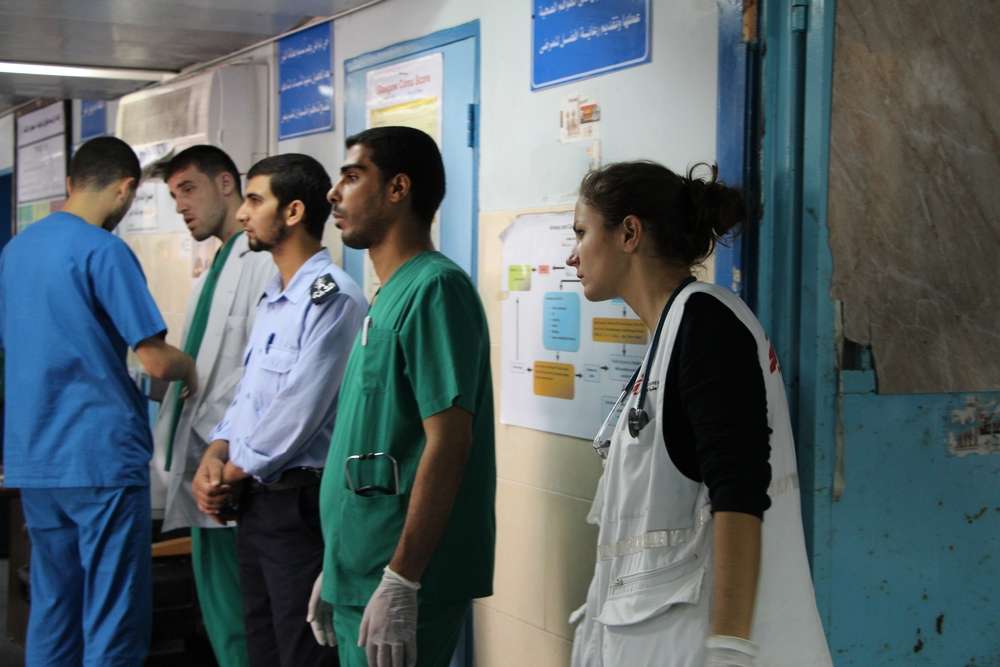 Follow three MSF doctors as they patch-up the wounded and attempt to save lives during a 12-hour shift in the emergency department of Al Shifa hospital in Gaza.

The MSF team is returning from Al Shifa hospital, in the centre of Gaza City. Throughout the night, the wounded have been streaming into the emergency department – many of them patients transferred from Al Aqsa hospital, which was bombed the previous day.

“It’s going to be a busy night,” says Alaa, an MSF driver, as the sun goes down on 21st July. With missiles from Israeli tanks and navy ships exploding a few kilometres from MSF’s base in Gaza, the surgical team head for Al Shifa hospital, where medical staff are already anticipating a large influx of wounded.

“I’ve been caring for two new patients in intensive care in the major burns unit,” says Adriana Dumitru, an anaesthesiologist, who has just joined MSF’s emergency team in Gaza. “One was a young mother, aged 24.

"The young woman had been buried under the rubble of her house for 12 hours. She lost her daughter and ten other family members there. We did everything we could to save her, but she died this morning.”

Adriana’s second patient was a ten-year-old boy. “The little boy had lost his father. His mother was with him. A missile struck their house, which collapsed. He suffered burns, crush syndrome and trauma, and had 100 wounds over his body from exploding shells.”

After surgery, the boy was admitted to Al Shifa’s burns unit. One small wound on his abdomen particularly worried Kelly Dilworth, the second anaesthesiologist in MSF’s emergency team. “It was a small cut in the belly that wouldn’t stop bleeding,” Kelly says.

“I requested a scan of his abdomen and we saw that he had an internal haemorrhage. The bomb fragments had made seven perforations in his small intestine."

“She saved his life,” says Adriana.

The MSF clinic in Gaza City is running at 10 to 30 percent of its capacity due to the intensity of the bombings.

Cosimo Lequaglie, an MSF surgeon, has just extracted a bullet from the cardiac vein of a 20-year-old woman. “The other two patients I operated on last night had chest wounds from explosions that occurred near them,” he says.

Many of the wounded arriving at Al Shifa hospital have been transferred from Al Aqsa hospital, which was bombed earlier in the day.

“A 20-year-old man was being treated at Al Aqsa when the hospital was hit,” says Kelly. “He was brought to Al Shifa’s emergency room. We had to amputate both legs below the knee. The operation took nearly three hours.”

“She had lost both her legs in an explosion and suffered multiple traumas, including head trauma. Other than ease her pain, there was nothing else we could do.”

Samantha Maurin/MSF
MSF staff at Al Shifa are treating patients suffering from burns, crush injuries, and other forms of trauma.

The emergency room is crowded with children with minor wounds. According to Cosimo, some 30 percent of those admitted to the hospital are children.

Tonight, the wounded are arriving at the intensive care unit in groups of three, four or five at a time. The first to be brought in come from the Shuja’iyeh neighborhood, which is still being shelled. The last group seen by the MSF team come from the area around Al Aqsa hospital.

At least five of the patients do not make it through the night.

In the early hours of the morning, there is an aerial strike nearby. “The entire burns unit building shook, like during an earthquake,” said one MSF team member.

At 8 am the team leaves the hospital and returns to MSF’s office. In turn, each person, cradling a cup of coffee, describes their night.

The others listen, eyes lowered, to the grisly reports. According to the UN, more than ten people were killed and 130 were wounded in the night’s bombardment.

Given what they witnessed the previous night at Al Shifa hospital, the team agrees that the figures sound low.

Find out more about MSF's work in the Gaza Strip