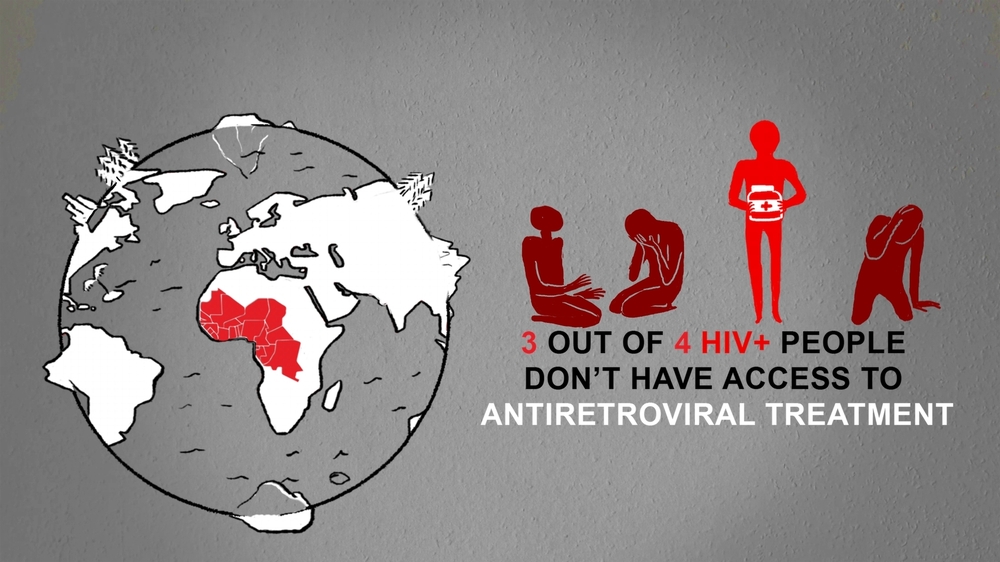 Ahead of the UN High-Level Meeting on Ending AIDS this week (8-10 June), the international medical humanitarian organisation Médecins Sans Frontières (MSF) commended governments for deliberating a critical goal that 30 million people should be reached with life-saving HIV treatment by 2020.

HIV: Governments at UN must address severe lack of treatment access in West and Central Africa during High-Level Meeting

New York – Ahead of the UN High-Level Meeting on Ending AIDS this week (8-10 June), the international medical humanitarian organisation Médecins Sans Frontières (MSF) commended governments for deliberating a critical goal that 30 million people should be reached with life-saving HIV treatment by 2020, but also warned that governments need to speed up the scale-up of treatment for people in countries where critical medicines reach fewer than one-third of those in need. These comprise most of the 25 countries of West and Central Africa, where despite the UNAIDS’ global ‘90-90-90’ goal to curb the HIV epidemic by 2020[1], over 4.5 million out of 6.5 million people living with HIV in the region continue to go without treatment.

“UN member states need to use this opportunity to recommit to people living with HIV in regions of the world that have been essentially neglected despite the tremendous advances in the last decade globally,” said Dr. Cecilia Ferreyra, HIV Medical Advisor for MSF. “While the number of people on life-saving HIV treatment worldwide doubled over the last five years to nearly 17 million people, those living in West and Central Africa are missing out and in desperate need of treatment.”

If serious about meeting the 90-90-90 goal, UN member states must provide support to close deadly treatment gaps by tripling the number of people who start antiretroviral therapy (ART) in the next three years, and implement ‘catch-up’ plans to help low-coverage areas significantly improve the numbers of people receiving treatment. Donor governments must fund the necessary changes needed, including making strong pledges at this year’s Global Fund replenishment conference. Countries must also implement World Health Organization guidelines mandating immediate HIV treatment for people living with HIV, regardless of how ill they are; immediate ART would simplify starting people on treatment in places with weak health systems, keep people healthy, and reduce transmission of the disease.

The international community’s narrowing focus of support on high-burden countries and HIV ‘hotspots’ in sub-Saharan Africa has led to greater neglect of people in West and Central Africa, lower-prevalence regions that account for one in five new HIV infections globally, over one in four AIDS-related deaths, and nearly half of all children infected by the virus. For children, only one out of 10 receive ART, which is key in making sure they live long, healthy lives.

“In West and Central Africa, three out of four people who need it don’t have access to HIV care—that’s more than 4.5 million out of the 15 million new people worldwide who should be started on treatment by 2020”, said Dr. Cecilia Ferreyra, HIV Medical Advisor for MSF. “We need to speed up scale-up of ART in low-coverage areas to prevent needless suffering, death, and new infections.”

According to a recent MSF report, Out of Focus: How Millions of People in West and Central Africa are Being Left Out of the Global HIV Response, service failures, lack of trained health staff and task-shifting, stigma, stock outs, and patient fees/payments often stand in the way of people living with HIV from getting treatment in these regions, and make the fight against HIV an uphill battle.

“Accelerating scale-up can happen in the West and Central Africa region. You start by implementing WHO’s recommendation to offer immediate treatment so that people living with HIV stop getting turned away because they are not sick enough to qualify for treatment under outdated criteria, and fit treatment in people’s lives through better adapted strategies to bring treatment to where people live and eliminate user fees,” said Dr. Mit Philips, MSF health policy advisor and lead author of the Out of Focus report.

In addition to the West and Central Africa regions, MSF is concerned about people who lack treatment for HIV and tuberculosis because of displacement, conflict or instability in areas with very poor treatment coverage.

MSF has been treating people with HIV/AIDS since the late 1990s and currently supports treatment for more than 250,000 people living with HIV in 19 countries, primarily in Africa.