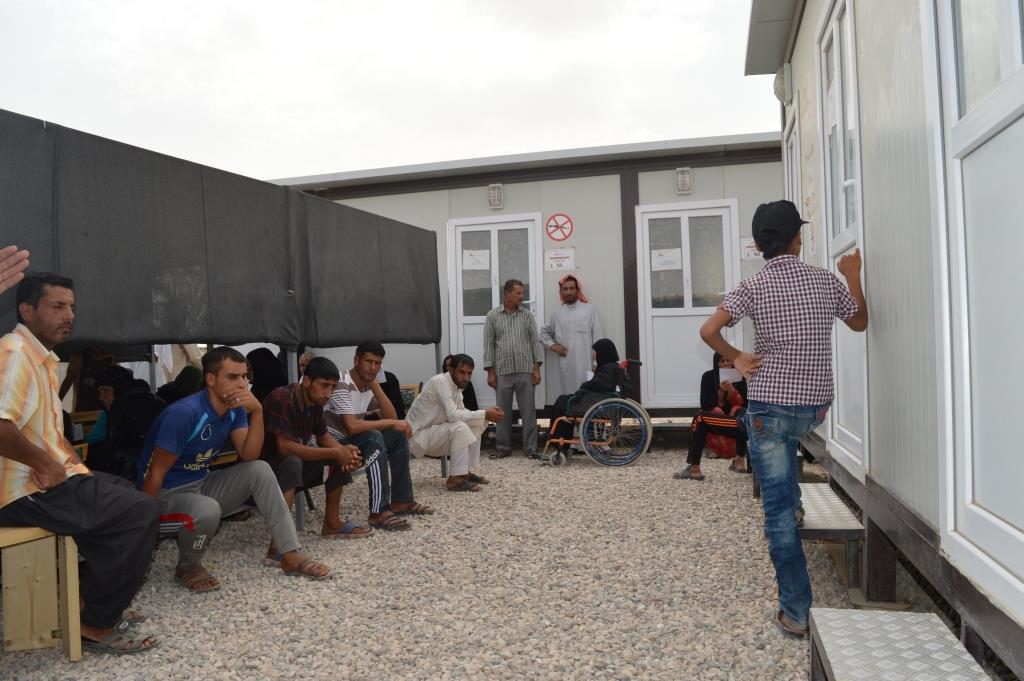 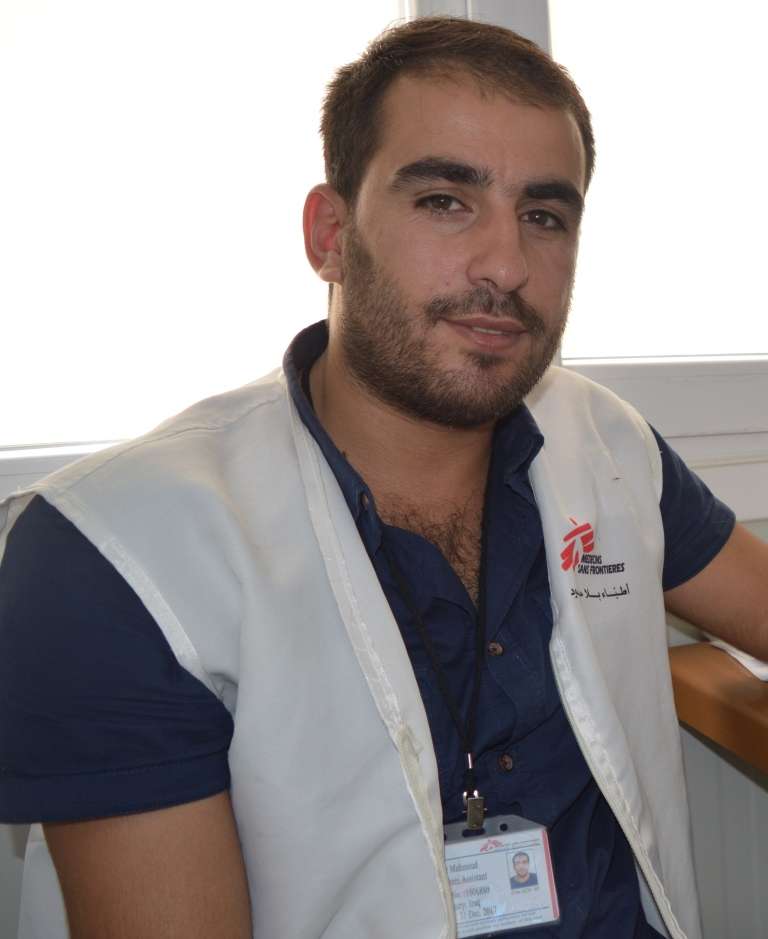 Iraq: Healing the psychological and emotional scars of the conflict

The first wave of displaced Iraqis came in 2014. After the launch of the Mosul battle last October, MSF received an influx of patients.

The sky is almost white at noon and the reflection of the sun on the beige rocks of the camp alley is blinding us. The heat in this part of Iraq is extreme, reaching sometimes 50 degrees Celsius. Hundreds of tents are sizzling in direct midday sun in Hasan Sham - M2 Camp, which has become a temporary shelter for 28,000 of the nearly 1 million Iraqis displaced by 10 months of fighting in and around Mosul.

Mahmoud welcomes us with his gentle and friendly smile and invites us to a modest white, air-conditioned consultation room in one of the two prefabricated “units” of the MSF clinic in the camp.

“The environment has improved since we arrived,”

Now we receive patients with more privacy and comfort.  But we still have difficulties providing support to all the patients who require it because they are so numerous and it’s difficult to find staff with the right level of experience in psychology and trauma.”

At the beginning, in 2012, the team was working with Syrian refugees. Then the first wave of displaced Iraqis came in 2014. After the launch of the Mosul battle last October, MSF received an influx of patients.

Although awareness about mental health is growing, most people do not spontaneously request these services, nor do they know where to find them. Besides, mental health services in Iraq are mainly centralised in hospitals around psychiatry, and many of these hospitals  lack appropriate drugs. Psychological support is not widespread in the community.

But after years of the so-called Islamic State (IS) control of large parts of Iraq and a year of heavy fighting between Iraqi Security Forces and IS to retake cities in Northern Iraq, the psychological and emotional scars of war are immense and thousands of people are in need of assistance. Even after escaping the frontlines, many still fear for their safety and worry about the future.

“The people who come here have lost everything. We see men, women and children of all ages. Trauma-related distress is a very difficult condition to recover from. It comes with symptoms like depression and anxiety... We sit with them, we listen to them, we speak with them and after several therapeutic sessions they feel better and find hope again. It helps them find a meaning for their life after all these troubles. Many lost trust in everyone and here they meet people who care about them, who give them time and attention, and who treat them with dignity, like human beings. With us they recover their humanity. It’s good to see light in this darkness. And it’s good for me too, as a refugee, to be able to help other people,”

“Each person is different,”

“Their capacity to recover depends on their personalities, their resilience, the support they have in the camp. We usually follow their cases for three to five months. We see them either in individual sessions, as husband and wife, as families with children, or sometimes in groups. We have lots of severe cases. I remember a man who was under medication before the conflict but couldn’t receive his drugs for quite some time. As part of the treatment, the psychiatrist provided him with the drugs, but he would not take them. So we – the community health workers  and I - had to visit him several times, to gain his trust, bring him to open up to us. Now he has a small shop and he can take care of his family,”

In Iraq like in most conflict contexts, men and women arrive with their families in the camps where they find a safer place to live after having sustained injuries or trauma and after a long and perilous journey. But then they have no work, often they cannot go out of the camp. The men feel they cannot sustain their status of family carer, so they lose a sense of social utility and self-confidence.

Women then take on additional responsibilities. Many are widowed or their husbands are missing and they have to care for their children, while trying to make ends meet. They bear alone the weight of responsibilities in the household.

“There was a woman with three children,”

“She was facing severe depression. She couldn’t sleep or eat, she lost interest in life. She was isolated and even suicidal. She was referred by another organisation which was working in the camp, because they knew she also needed medications, and they didn’t provide it. The first time I met her she told me: I lost my son. I don’t know what is happening in my head. When she was discharged, after three months follow-up, with anti-depressants, she said: I still have the pain in my heart, but now I can go ahead and live my life. All the djinns (evil spirits) have left my head.”

Lots of children have been traumatised by the fighting and the displacement. They suffer anxiety, and have nightmares regularly. As medications have to be avoided for children, the sessions with the psychologists are the main treatment for them. But children can heal more easily and quickly than adults if they are in a safe environment.

There are some schools in the camp, but many kids didn’t go to school before the conflict. Rather, they like to run after each other through the alleys of the camp, or rest under the shade of their tents during the hottest hours of the day.

Today, the MSF teams see people going back to their homes and sometimes returning back to the camp, either because their neighbourhoods remain unsafe, or their homes simply don’t exist anymore. For those who go back home, many do not have access to water, electricity or work. So they return, because in the camp, they at least have a shelter, and access to water, electricity, humanitarian aid, health care, and food.

Returning home can help people recover, but then comes the difficulty of continuing treatment, as those returning are often out of MSF’s reach, in case follow-up is necessary. They also have limited access to mental health services in their areas.

More than 18,000 consultations since the beginning of the year.

In September, around 90,000 internally displaced people (IDPs) were living in nine camps where MSF works, between Erbil and Mosul. In these camps, MSF is the only NGO providing psychiatric care to the most severely affected patients, and to all patients who previously had psychiatric disorders and were left without care because of the conflict.

Because the needs are huge, MSF has a substantial team consisting of  6 psychiatrists, 6 psychologists, 7 psychosocial counselors and 2 Mental Health Gap doctors. The team has the capacity to provide the three components of mental health care: psychiatric care for severe cases which require psychotropic medications, psychological care with psychotherapy and psychosocial support to find practical solutions with other NGOs for the patients’ everyday lives.

“Our patients can be referred to us either by other organisations, or by our medical teams. They may also come by themselves if they heard about our services. In July 2017, we added community health workers in our team: they go from tent to tent to explain that people in very disruptive environments can suffer mental health problems and to give information about the services we provide. They also visit patients when they miss an appointment. Before this was done by the psychosocial counsellors but because of their workload the activity was not done regularly.”

When the patient arrives in MSF clinic, they sees first the psychosocial counsellor who, after an assessment, refers them to the psychologist or the psychiatrist if it is a moderate or severe case, or decides to follow them if it is a mild case.

Since the beginning of the year, Erbil project teams provided more than 18,000 mental health consultations and more than 23,000 medical consultations, including consultations for non-communicable diseases (mainly diabetes, epilepsy, asthma, hypertension).