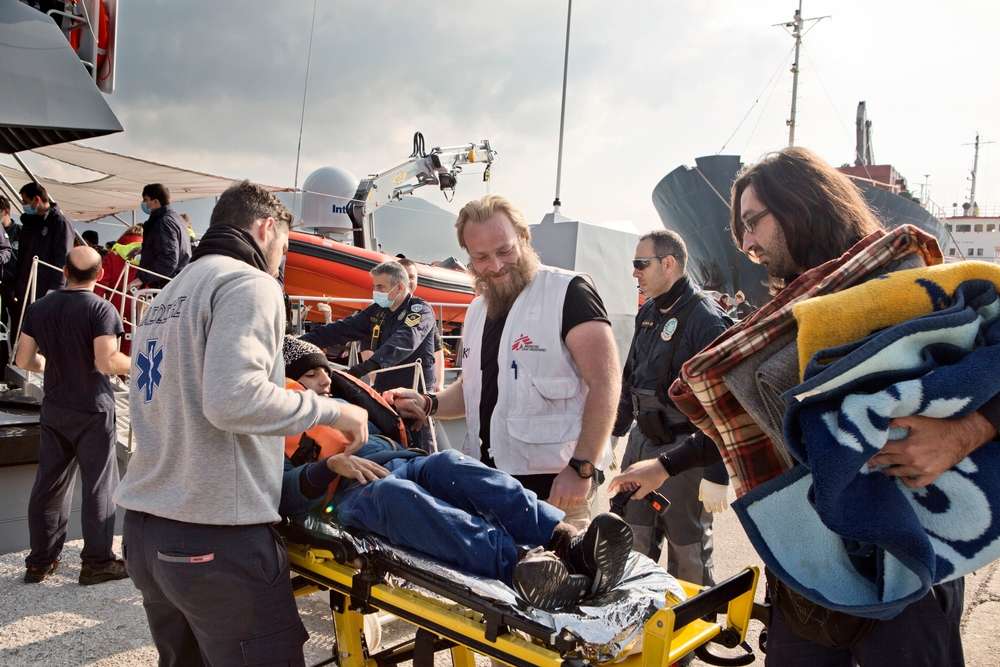 Arriving migrants, asylum seekers and refugees are left with poor accommodation conditions and limited access to healthcare. A functioning reception system is urgently needed to adequately receive these people.

One hundred refugees per day

The MSF team providing care to refugees on the Greek islands has witnessed an increasing number of refugees arriving at the Dodecanese islands since mid-March. There has been an average of approximately 100 refugees entering Greece from the islands per day in the last weeks; the same number of arrivals recorded in the peak months last summer.

More than 450 people arrived in January, and yesterday 180 refugees arrived in one day. The majority of the refugees are Syrians, other nationalities include people from Afghanistan and sub-Saharan African.

Closure of EU external land borders leave refugees and migrants with no choice but to use the sea as their main route to apply for asylum in Europe.

Alexandros Kataropoulos/MSF
With the large number of refugees and migrants arriving on the island of Kos in Greece, a temporary tent was set up for the first time yesterday by the Greek authorities to cope with the needs of the arrivals.

No reception system in place

“There is no reception system in place. In Leros, a reception facility was made available but has been left unused. And in Kos, in the first week of April, the police station was crammed with more than 200 people including pregnant women and children. They stayed in awfully small spaces and were offered very limited assistance,” said Stathis Kyrousis, MSF country representative in Greece.

Some of the migrants had to sleep in the courtyard in the police station during the night whilst they waited for the administrative procedures to be completed.

“People should be provided with shelter and toilets, receive organised food distribution, and have access to basic healthcare.”

MSF returned to the Greek islands in mid-February to provide medical care and distribute essential relief items to refugees, asylum seekers and migrants who arrive in small boats that have crossed the Aegean Sea in search of protection in Europe.

Since its first intervention on the islands last year, and despite of several requests addressed to relevant Ministries, MSF has seen no improvement in the situation. There is a lack of political willingness to make significant changes in order to provide assistance to the refugees.

Alexandros Kataropoulos/MSF
MSF doctor Dimitris Giannousis reports that respiratory tract infections and hypothermia are among the most common medical problems faced by refugees arriving in Greece.

According to the latest figures from the authorities, there was a 145 percent increase (from 186 to 457) of people arriving in the Dodecanese islands in January 2015 compared to January 2014. Overall in Greece, the number of new arrivals has increased from 1,070 in the last week of February to 2,212 in the last week of March.

While the number of people arriving in Italy via the Central Mediterranean route from Libya rose in the first two months of this year (in January by 59 percent and in February by 33 percent), there was a significant drop (59 percent) in the number of people who arrived via this route in March.

Need for a contingency plan

MSF is extremely worried that the situation in the Greek islands will only get worse if nothing is done to prepare for the upcoming influx. The Greek authorities and EU must urgently agree a contingency plan to cope with the needs that may emerge from this potential new trend.

“We are not yet in the peak season which usually falls from July to September. This certainly has rung the alarm bells for all of us that more people will need to be assisted in the summer months to come,” said Kyrousis.

“We see there is a possible shift in the migration trend which is due to the growing instability in Libya and the visa restrictions imposed on Syrians by Algeria and Lebanon. We don’t see as many Syrians as before at landings in Italy these days,” said Manu Moncada, MSF’s operations coordinator for migration.

“Syrians are left with very few options to reach Europe in search of protection,” he added.

Currently, the MSF team in Kos is conducting vulnerability screenings to identify the most vulnerable groups such as pregnant women and minors, and providing medical consultations.

From mid-March to the beginning of April, MSF conducted around 500 consultations and distributed 500 kits of relief items such as soaps, combs, toothbrushes and towels, as well as 1,100 sleeping bags and 300 emergency blankets.

Since 2008, MSF has responded to the urgent medical and humanitarian needs of newly arrived migrants in Greece, as well as to asylum seekers and migrants in administrative detention. In collaboration with two Greek organisations, MSF is also providing medical rehabilitation for victims of torture in Athens.