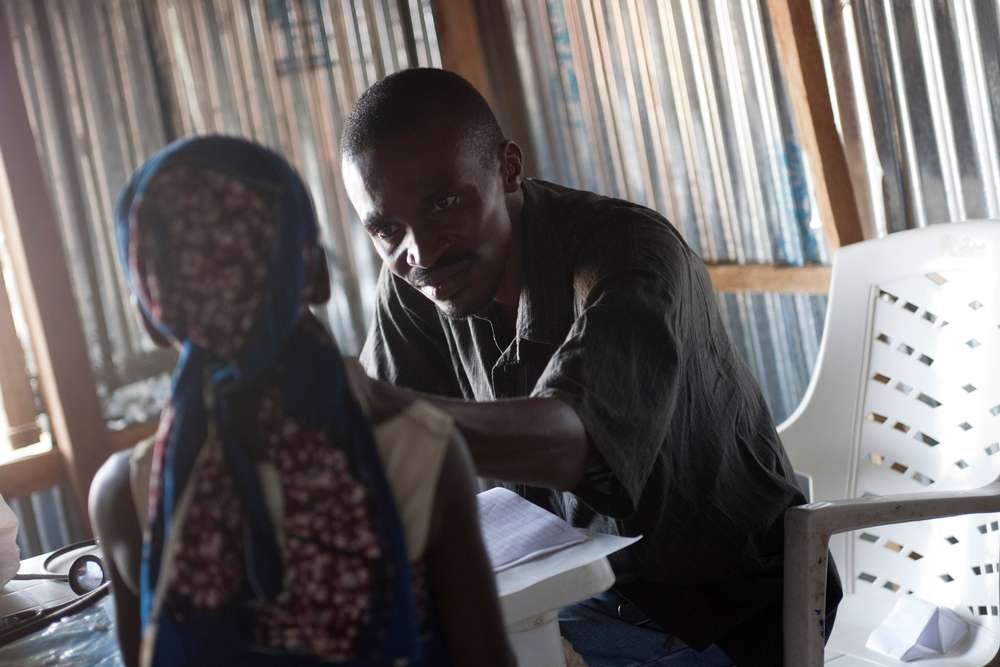 In March 2010, Médecins Sans Frontières/Doctors Without Borders (MSF) was alerted to a high number of child fatalities in Zamfara state, northern Nigeria—an estimated 400 children died. Laboratory testing later confirmed high levels of lead in the blood of the surviving children.

MSF is a central player in treating lead poisoning in Zamfara state, and is responding to the acute phase of this emergency. MSF has for the moment controlled mortality, but patients with lead poisoning will require significant long-term treatment and follow-up.

Ibrahim, 10 years old, is responsible for adding crushed stones to the grinding machine at the gold processing site in Bagega, Nigeria.
© Olga Overbeek

There are three pillars that must be implemented for an effective response to the crisis:

Chelation therapy will only work with remediation (otherwise the child continues to live in a contaminated environment and ingest lead), and in the long term effective remediation requires safer mining practices to be introduced.

While seven of the worst affected villages have been remediated, significant remediation is still needed in new sites, particularly in the town of Bagega where an estimated 1,500 children are exposed to lead poisoning. Some people in Bagega have started to try to remediate their own compounds.

MSF cannot provide effective treatment in locations, such as Bagega, that have not been remediated. MSF treats the sickest children at its inpatient facility in Anka hospital.

Why MSF focuses on treating children five years and under

Adults and children over five are susceptible to lead toxicity, but children under five are especially vulnerable, as they are most at risk for serious morbidity and death.

Zamfara state contains many areas with significant concentrations of heavy metals in the soil and rocks. There has been gold mining in Zamfara state, northern Nigeria, for decades, but until recently it was not widespread or profitable.

Since 2009, the price of gold has appreciated substantially, from around US$800 per ounce, to US$1,653 (May 2012). This has resulted in a renewed interest in mining in Zamfara state. An increasingly active artisanal mining industry digs up rocks by hand, breaks them into pebbles with hammers, grinds the pebbles to sand with flour mills, and extracts gold from the sand using sluicing, panning, and mercury amalgamation (and in some cases, cyanidation).

Usually the health problems associated with artisanal mining are related to mercury and/or cyanide use. In Zamfara where the gold bearing deposits contain unusually problematic concentrations of lead these are overwhelmed by the enormous effects of lead poisoning.

The crushing of pebbles into sand in dry-running flour mills produces enormous amounts of dust which in some places is highly contaminated with lead. Lead can enter the body through the lungs or the digestive tract.