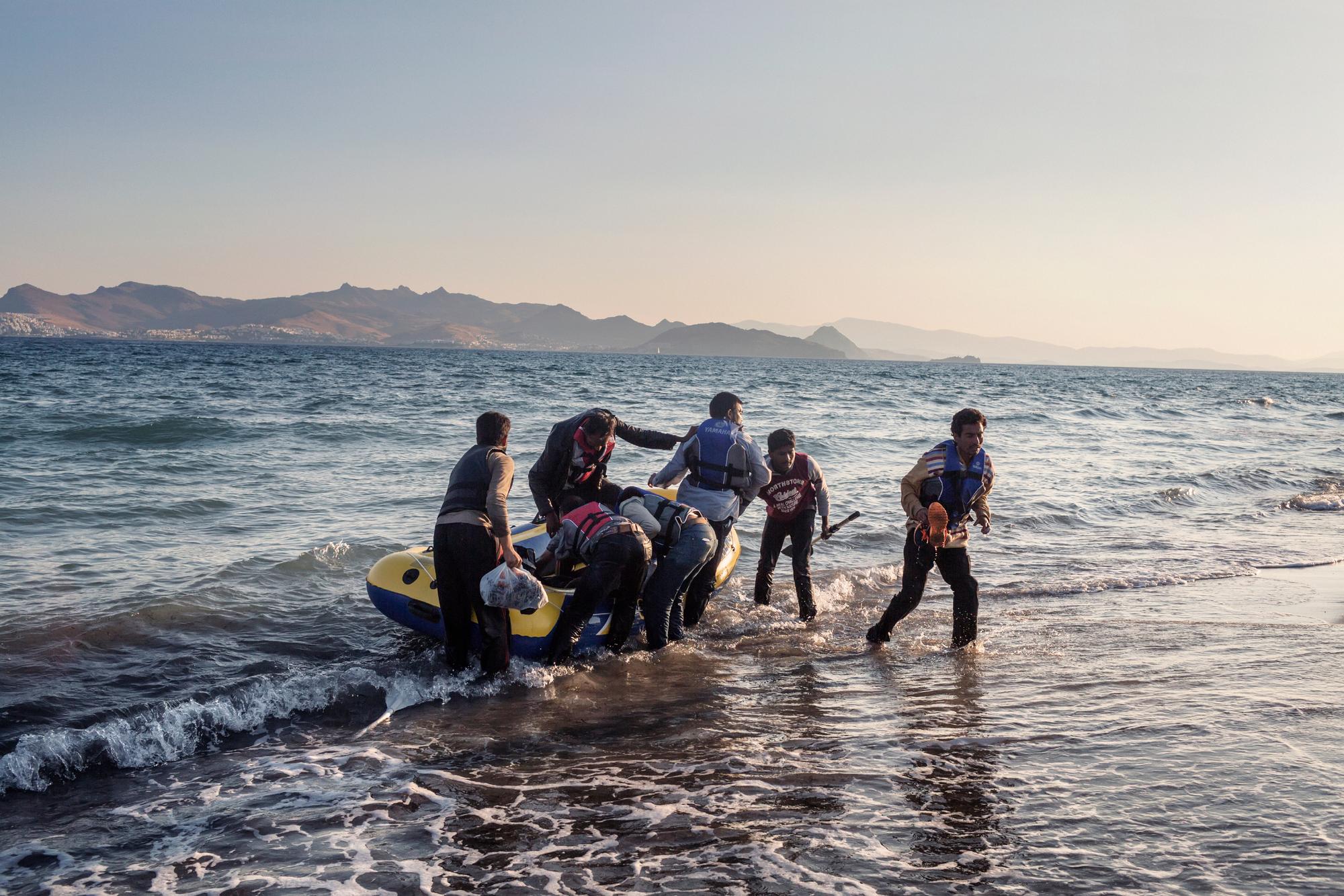 Opinion and debate: We are Europe - we can do better

Opinion and debate: Vickie Hawkins, the MSF UAE Executive Director, witnesses the arrival of migrants in Greece and calls on Europe to live up to its values: "The least we could do is treat those who arrive on our shores with some humanity".

This article was first published on the Huffington Post Blog

A Greek island, close to the Turkish mainland. Beautiful bays, with rocky beaches and a turquoise blue sea. Small villages dotted along the coastline, roads lined with shady tavernas. As we drive along the coastal road, a boat approaches the shore, filled with people cheering at the prospect of dry land.

Despite the idyllic scenery, this is no tourist boat. As we pull up the car, people tumble out of the dinghy clutching a few possessions. The atmosphere is one of jubilation; people shake our hands and ask us to pose for photos.

And here's the euphoric scene in full as people jump to shore, leaving the #Mediterranean behind them. pic.twitter.com/Dzi91juNCz

Most are Syrians, fleeing the war, violence and forced conscription of their homeland. Some left their homes in Aleppo, Damascus and Kobane months or even years ago.

Many spent time as refugees in Turkey and Lebanon, but as governments lost patience with the tremendous refugee burden, the refugees faced deteriorating conditions and decided to place their lives in the hands of people smugglers.

As we talk to the new arrivals, two more boats arrive, this time carrying mainly Afghans, with some Iraqis thrown in for good measure, lengthening the list of places that you currently really don't want to be.

Respect for life and dignity

As we walk up the road with them, we hear stories of the long journeys that people have undertaken: of beatings at the hands of the Syrian military as they tried to leave; of exploitation at the hands of gangmasters when they looked for work in Turkey; of days and nights camping out in the forests of western Turkey, without food or water; of being robbed by the traffickers even as they were pushed out to sea.

At last, they have reached Europe - a continent that respects and protects human life and dignity.

They don't linger, asking for directions to the police station in the capital where they can be registered. We pack as many pregnant women and young children as we can into our car; some locals and tourists lend a hand where they can.

Our MSF colleague speeds off to deliver the women and children to a car park, where volunteers have gathered to give them some water and a bit of food to keep them going until a bus arrives to take them to the police station.

We follow on foot, embarking on the 5 km that the rest of the new arrivals need to walk in the baking midday sun.

Before long we come across some groups who have wilted by the roadside, another pregnant woman and some older children in their midst. We stay with them, calling for the car to come back when it can. The pregnant woman, Sherin, is worried about her baby. She hasn't felt it move for five days.

The next day we encounter Sherin in the midst of an olive grove. There the idyll ends. The olive grove is being used as overflow for a camp which is in itself an overflow for the main reception centre. There aren't enough tents, and she spent the night on the ground. She has at least seen a doctor and heard her baby's heartbeat: the baby is weak but alive.

As we talk, others arrive looking for somewhere to shelter, but the tents are full and a lone entrepreneurial local is selling tents at a price few can afford.

More and more people arrive, into one of the most miserable looking camps I've ever seen. There is nobody to provide them with information about what happens next.

The only assistance being provided is in the form of some Greek volunteers and a couple of international organisations providing basic medical care, latrines and clean water, MSF included.

The refugees are full of questions, they are hungry and they need shelter and rest. What a poor welcome we are giving them.

We are a continent, and Britain is a country, that values individual liberties and democratic values. We preach the virtues of those values to foreign governments and regions of the world, and have at times created chaos in their name.

Do we wonder why, then, that people from those other countries look to us for protection and sanctuary in their hour of need?

The number of people who have taken their future into their hands to travel to Europe on inflatable boats, entrusting themselves to smugglers who are interested only in their money and place no value on their lives, is miniscule compared to those currently hosted in Lebanon, Turkey and other countries bordering the conflict zones of the world.

By failing to offer those who seek protection further from home safe, legal routes to do so, we force them into dangerously overcrowded boats and into the hands of smugglers. The least we could do is match up to those values that we promote around the world, and treat those who arrive on our shores with some humanity.

What does 'humanity' mean?

This is the horrifying scene just moments after the boat carrying 600 + people sank last Wednesday via @Reuters pic.twitter.com/SCzEjAXrXm

Humanity means ensuring that search and rescue efforts are equivalent to the need and that we do not hear of further tragedies on the Mediterranean such as the one that MSF's search and rescue boats attended last week, where an estimated 200 lives were lost.

It means improving reception conditions to ensure that families, some travelling with very young children, are not camped out on gravel patches with nothing but the shade of an olive tree to give them shelter. It means providing them with information so that they understand their rights, what options they have and what they can and can't expect from Europe.

We are Europe - we promote to the world the importance of respect for human rights and protection of individual liberty. The UK has frequently been at the vanguard of that effort.

The Syrians, Afghans and Iraqis that I've met over the past 48 hours have unfortunately yet to see that side of us.

Even worse, the rhetoric coming from the UK's government, most recently portraying refugees and migrants as a 'marauding horde', seeks to criminalise and dehumanise those whose only crime is to seek in Europe the values that we promote to the world