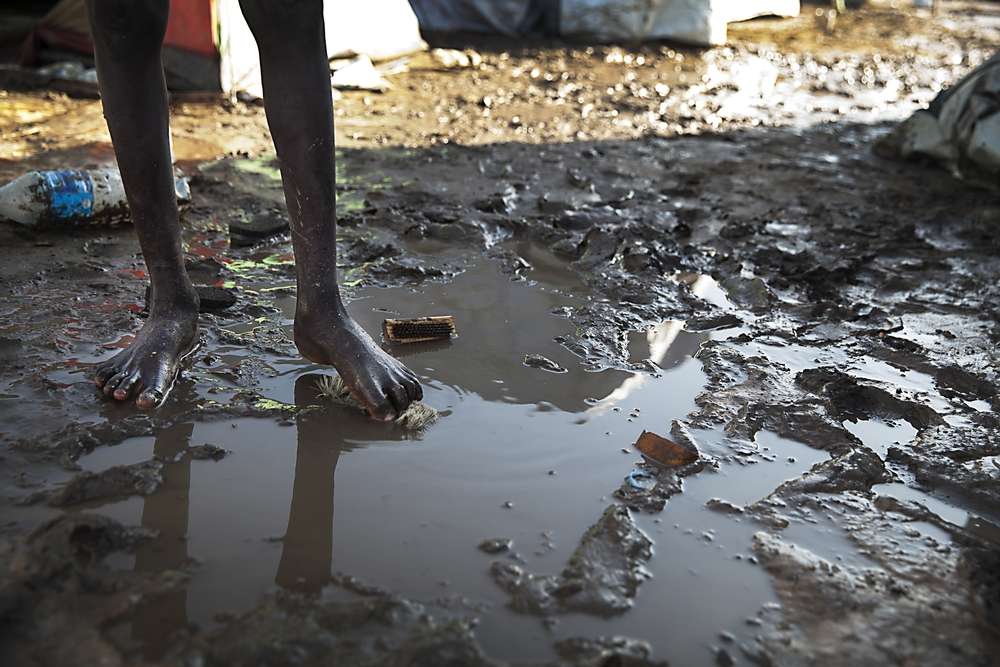 PRESS RELEASE: MSF warn that preventable diseases and severe acute malnutrition are causing an alarming number of deaths among the estimated 45,000 people taking refuge at a UN base in Bentiu, South Sudan,

Preventable diseases and severe acute malnutrition  are causing an alarming number of deaths among the estimated 45,000 people taking refuge at a UN base in Bentiu, South Sudan, Médecins Sans Frontières/Doctors Without Borders (MSF) warned today, calling for a rapid increase in water supplies, hygiene promotion and latrine construction.

The number of people seeking protection at the base increased nearly tenfold in the last two months due to relentless violence in Unity state, while recent flooding has left the area without enough clean water or sanitation facilities.

Medical reports from the camp show that at least three children under five-years-old are dying per day within the Bentiu Protection of Civilians sites. Most of the deaths are due to acute diarrhoea, pneumonia and malnutrition which are linked to the harsh conditions.

"People came here for safety but they are facing life-threatening conditions inside the camps," said Nora Echaibi, medical team leader of an MSF hospital on site. "It is rapidly becoming catastrophic."

Recent heavy rains exacerbated an already grim situation, flooding latrines and making it impossible for water trucks to use the roads for deliveries. Medical facilities and other areas where aid organizations provide services have been flooded.

As of mid-June, wells and tanker trucks are supplying only 4.4 litres of clean water per person per day, which is far below the international standard of 15 litres and residents are forced to drink from puddles that are often contaminated with human waste. There is only one working latrine on average for every 241 people.

Displaced people continue to arrive every day from the surrounding region in very bad condition, generally after walking long distances or surviving for a long time in the bush without assistance.

Ongoing hostilities make it impossible to use the roads safely, even to collect supplies such as sand, which is essential to protect areas from flooding. Due to the flooding of the roads, all materials have to be transported by plane at high cost.

MSF teams are very worried about the prospect of further disease outbreaks, such as cholera, hepatitis and malaria.

"It is a very challenging environment, but more aid is needed to avert a catastrophe. MSF is currently increasing its hospital’s capacities in the camp and sending additional emergency medical teams to try to tackle the situation," said Raphael Gorgeu, MSF country director in South Sudan.

"We call on aid organisations to do everything they can to improve conditions here, especially water and sanitation. We also call on armed groups to allow aid to travel freely on the roads."

In the Bentiu Protection of Civilians site, MSF currently runs a hospital with 90 beds, which admitted 202 patients between 17th May and 9th June and performed 70 major surgical interventions.