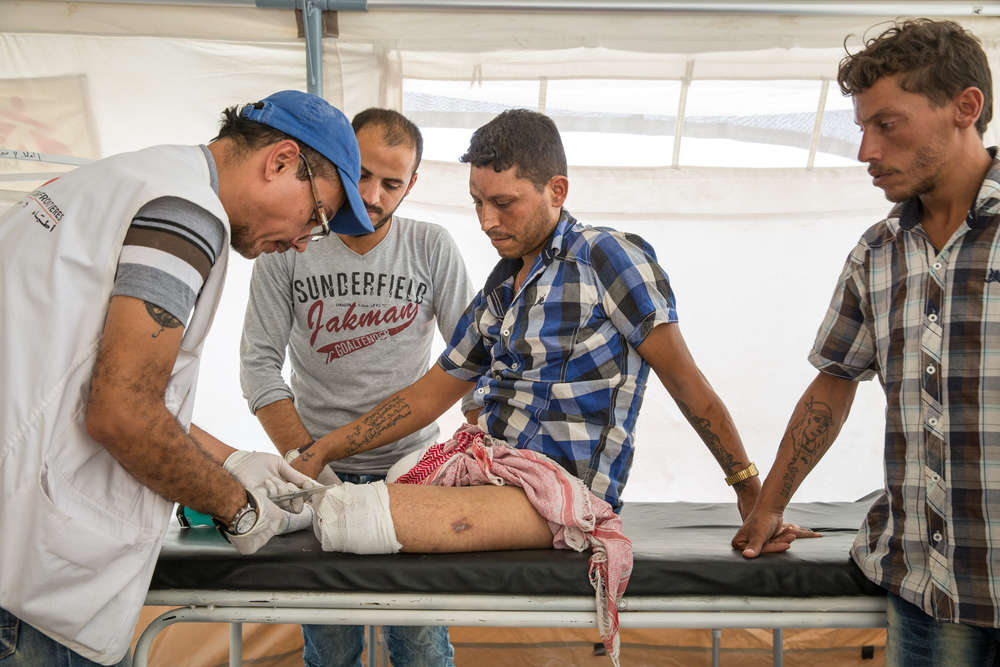 Syria: Update on situation and humanitarian needs after Raqqa offensive

People who fled the city and surrounding villages in the past months had to make impossible decisions, whether to stay put under heavy bombardment, or leave the city by crossing active frontlines and minefields.

The offensive on Raqqa, in northern Syria, which started in June 2017, ended on 17 October when the Syrian Democratic Forces (SDF), supported by the international coalition, took control of the city that had been cleared of fighters from Islamic State (IS) group. The end of the battle to control Raqqa however, doesn’t mean that the war in this part of Syria is over, or that people are no longer suffering.

How did people flee from Raqqa?

People who fled the city and surrounding villages in the past months had to make impossible decisions, whether to stay put under heavy bombardment, or leave the city by crossing active frontlines and minefields.

Having made the decision to leave, escaping Raqqa – knowing it was the stronghold of Islamic State (IS) group – was fraught with difficulties. People were punished if they tried to flee, and generally managed to leave only by paying huge bribes. In the recent days, and before the battle ended, up to 1,300 arrived at Ain Issa camp for people displaced by the conflict.

What’s the humanitarian situation now in Raqqa and for people fleeing Raqqa?

The battle for Raqqa ended on 17 October, and to our knowledge, people left Raqqa city under frightening circumstances as the offensive drew closer to the populated neighborhood. According to coalition forces, about 3,000 civilians were rescued during the last week of fighting, after an evacuation deal was agreed with IS group.

It would appear that people have been directed to Ain Issa camp, which already hosts nearly 12,000 internally displaced people (IDP) from Raqqa and Deir ez-Zor, where they undergo further security screening. It’s unclear what this screening process entails or for how long people may be detained at these camp locations before being able to go home or to other safer areas.

From 10 to 18 October, 1,274 people were brought by Syrian democratic forces (SDF) from Raqqa city to Ain Issa IDP camp.  Nearly all of them are kept in a ‘special security area’ 200 metres away from the camp. It’s not clear why people newly arrived from Raqqa are segregated from the regular camp.

Most of the people who fled Raqqa during the last week are women and children. There are some elderly men; the few men left are mostly young and have had limbs amputated and wear post-surgical external fixators, or have gunshot wounds.

How is MSF supporting people who just fled Raqqa?

Internally displaced people from Raqqa in regular areas of the camp have access to the outpatient department run by MSF.  A medical consultation post was set up in the special security area. Overall MSF has provided 77 medical consultations, mainly to women and children, and referred 13 patients to Kobane hospital for treatment of old infected wounds.

Another team is conducting a vaccination response among the new arrivals, to ensure that children who have missed being vaccinated for a long time get caught up – but also to mitigate outbreaks of diseases like measles and polio.

People coming from Raqqa and Deir ez-Zor are scared and uncertain of their future, and are in need of clothes, food, water, shelter, health care and protection.

What injuries is MSF seeing?

As the frontlines shifted during the battle for Raqqa, especially as they drew closer to the most populated neighborhoods, MSF teams in Tal Abyad hospital started to see more patients with weapons-related injuries.

On some days, up to 20 patients arrived at the hospital, most with blast wounds as a direct result of bombs or landmines, and with trauma injuries directly related to building collapses from the airstrikes. In the last days of the battle, the numbers of patients with these injuries has decreased.

In Kobane hospital, we received very few patients wounded in the fighting. In July, we received 63 patients injured mainly by gunshots and mine and bomb blasts, and in August, we received three patients.

Where is MSF working in Raqqa governorate?

MSF is working in Tal Abyad hospital supporting trauma care, surgical services and the overall running of the hospital in partnership with the local health authorities.

We have eight ambulances providing referral services around Raqqa city for anyone who is injured or who needs emergency medical care to access secondary healthcare facilities that MSF supports in Kobane, Menbij, or Tal Abyad. MSF also works in advanced medical points in Hazima and Tabqa, north of Raqqa city, for people in the country north of Raqqa who need emergency medical care.  Five vaccination teams are also working across the Raqqa governorate, including in Ain Issa camp.

In Ain Issa camp, we are running an outpatient department, providing nutrition support for infants and children under five years of age, running health promotion, mental health consultations, and physiotherapy activities. We are also running a primary health care clinic in the city of Tabqa and a team is working in Kobane hospital, supporting the emergency room, the intensive unit care, the operating theatre, the recovery room, and all surgical cases.

Is MSF inside Raqqa city?

No, we are not. We are on the outskirts of the city as it’s still extremely dangerous for humanitarian organisations and for people from Raqqa to go there due to landmines and other war explosives. There is a large amount of destruction in the city, and the area needs to be fully demined before we are able to provide any assistance there.

What is needed from humanitarian organisations?

Humanitarian organisations need to be present, to support people who have been affected by the conflict and provide impartial, neutral and meaningful assistance. An organised approach between all humanitarian actors to assess the needs in the camp, including water and sanitation, health care, food, needs to be carried out.  Most importantly, people and humanitarian organisations need be aware of demining needs and activities.