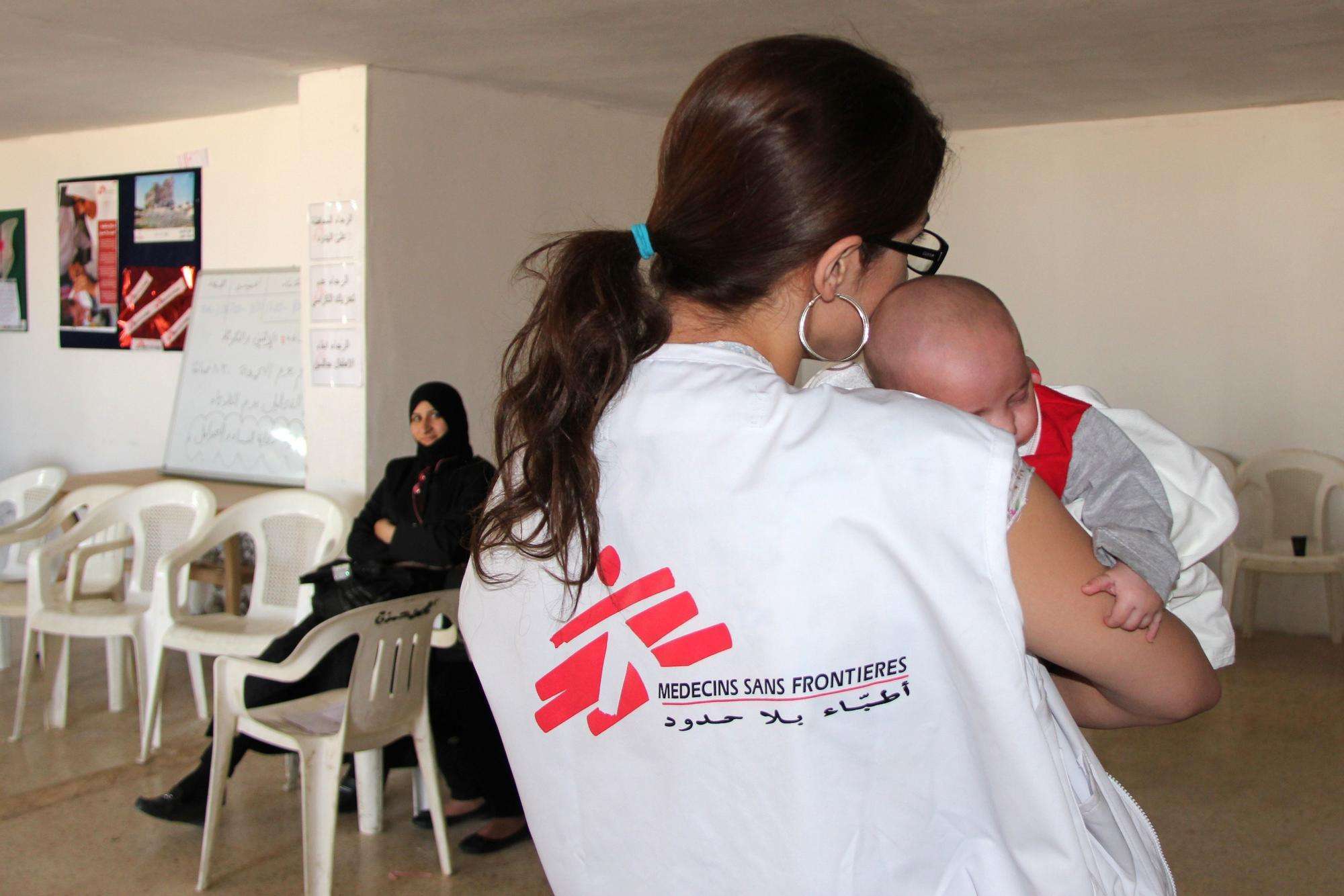 MSF has opened a reproductive healthcare project to respond to major needs among refugees in the Bekaa valley, the main entry point for Syrians crossing the border into Lebanon.

“I was seven months pregnant when I came to Lebanon,” says 18 year-old Maryam, a Syrian refugee from Aleppo. “Many of my relatives were killed back home. I was terrified and panicked. I had to walk for hours before crossing the Lebanese border and suffered a haemorrhage. I feared miscarriage.”

In April 2013, Médecins Sans Frontières/Doctors Without Borders (MSF) teams in Lebanon opened a reproductive healthcare project to respond to major needs among refugees in the Bekaa valley, the main entry point for Syrians crossing the border into Lebanon.

“Many women arrive here by themselves, without their family or husbands who have been left behind or killed in the war,” says Marjie Middleton, an MSF midwife in charge of the project.

“Some are pregnant and haven’t been able to see a healthcare provider during their pregnancy. They don’t know whether their baby is okay or not because they haven’t had access to antenatal care. They’re extremely anxious, and the combination of psychological and physical stress is very dangerous for their pregnancy.”

Many refugees don’t know anyone in their new country, so it’s hard to find help within the community.

“Pregnant women often have no idea where to go,” says Middleton. “We’ve heard stories of women who were left to deliver on their own, in a tent. Such stories are very upsetting to me as a midwife, because I know how dangerous it is and how awful it must be for a mother to give birth scared and alone.”

Cost can be an issue as well. Antenatal care is very expensive in Lebanon, even for the Lebanese women.

“A woman will have to spend the equivalent of US $20 just to see a doctor and pay for vitamins and transport,” Middleton notes. “This is often half or more of a daily worker’s weekly wage.”

The United Nations High Commissioner for Refugees (UNHCR) currently covers 75 percent of the delivery costs for Syrian refugees regardless of their registration status (the UNHCR had covered the whole bill but recently reduced its commitment to 75 percent due to the shortage of available funds).

But even that 25 percent can be more than many refugee families can afford, and there are only six hospitals in the Bekaa valley sponsored by the UNHCR where women can deliver.

The costs amount to US $50 for a normal delivery and US $200 for a caesarean. “If the refugee cannot afford to pay, she might be refused access to the hospital or have her refugee card confiscated, which often means no access to food vouchers until she can pay off the hospital bill,” Middleton says.

The risks of delivering at home without a skilled birth attendant are very high in general, and even higher in the places most refugees are settling, where living conditions are often very precarious.

The cramped and often unsanitary conditions carry risks for pregnant women. Watery diarrhoea has been reported, for instance.

“We are also seeing lots of reproductive tract infections among our patients, partly because they’ve had no access to care during their pregnancy and because of their poor access to water facilities and hygiene,” says Middleton.

“Infections are one of the leading causes of premature delivery.” Poor diets are another problem, she adds: “In many cases, refugee women cannot afford basic food, which makes it harder for a baby to grow and for a woman to maintain her own health during her pregnancy. I’ve seen cases of malnourished newborns.”

In accordance with World Health Organisation (WHO) standards, MSF aims to provide four antenatal visits per pregnancy and, in case of concern or complication, refers women to a gynaecologist for free treatment.

In addition to providing antenatal care consultations in its clinics through skilled midwives, MSF helps women recognise possible signs of danger and establish birth plans, so that pregnant women arriving in Lebanon know what to do and where to go when labour starts, or if they have problems.

After birth, both the baby and the mother are still at risk. MSF offers postnatal care and family planning options. “We try to get the women to come back in the first week, and then again at six weeks for a final check and to start them on contraception if they wish,” says the midwife.

“Many women want to have babies, but many others would rather not get pregnant.” MSF is currently responding to a high interest and demand for family planning services amongst refugee women, as many of them prefer avoiding pregnancy while living in such difficult conditions.

“My husband and I don’t want at all to have another child for the time being, because the situation has become unbearable in Syria and we feel very insecure in Lebanon,” said a woman named Maryam, who came with her two-month-old baby to the MSF clinic in Baalbeck to get a contraceptive pill.

Some women did not have the option of contraception while fleeing Syria or in Lebanon due to the lack of information or financial constraints. MSF also provides general women’s healthcare for refugees suffering from infections, sexually transmitted diseases and any other women’s health problems.

MSF has been running three reproductive health care clinics in eastern Lebanon’s Bekaa Valley since April 2013. Nearly 850 consultations had been provided by skilled Lebanese midwives up until the end of June.

Find out  more about MSF’s work in Lebanon and Syria