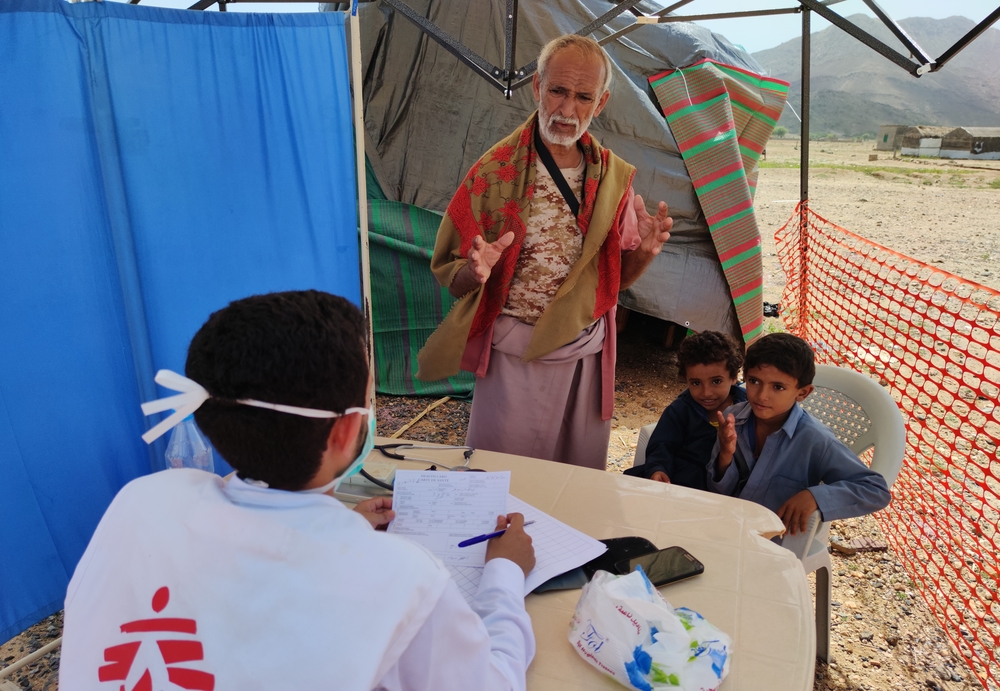 Teams from Médecins Sans Frontières (MSF) have recently managed to restart medical activities for displaced people in Yemen’s Abs district. COVID-19 had forced mobile clinics to suspend their activities, leaving thousands of families with even fewer possibilities for  accessing basic healthcare. In parallel, MSF staff in Abs hospital are now seeing an increase in arrivals after a period during which fear of infection kept many people away from health facilities. This delayed treatment for people requiring medical attention, notably children with severe malnutrition.

It’s late September but the temperature at 8.30 am has almost reached 40°C and the hot, humid air makes breathing difficult. Families in Khudish camp, one of the most populated in the area ─ around 10,000 people according to official figures ─ see MSF vehicles approaching and know that, for the first time in months, a mobile clinic will be available to them. They start gathering in the usual location and children run because they know that in one of the cars, there is a large water carrier. And what they need right now is cold  water.

“Finding clean water is one of the main challenges in these camps and people often search for it in wells, where it isn’t drinkable,” says Tareq Farhan, MSF’s medical manager. “We see many cases of diarrhoea that are due to contaminated well water.”

Abs district in Hajjah governorate hosts around 150,000 displaced people who had to leave their homes because of the five-year-long war ravaging their country. Many families have been living in extremely difficult conditions for years and one of the main challenges they face is not having even the most basic healthcare. This comes on top of recurrent problems of finding essential goods, food and drinking water. Their lives, which were hard before, have been made even more difficult by COVID-19. In addition to the risk of infection, the little humanitarian assistance they were receiving has become less frequent and the fear of going to health centres has increased. Many people feel the prevention measures in place will not protect them.

MSF has been present in Abs since 2015 to respond to the needs of displaced people and support health facilities in the area, including the largest hospital. But the onset of the pandemic made it very difficult for teams to move around to reach locations where the displaced have temporary settled.

Since the first three mobile clinics resumed their activities in the camps of Khudish, Bani Mushta and Almatayn, almost 300 consultations have been conducted, most of them with children under the age of five years and pregnant women. Additional activities, such as rapid laboratory tests to detect malaria or determine glucose or protein levels, have also started again.

The local people are suffering the effects of the conflict and have problems accessing essential health services.

Fatma Ziyad is from Khudish and is pregnant with her seventh child.

“I came for a check-up as it was experiencing some problems with my pregnancy,” she says. “MSF people told me I need a monthly check-up, where I will also be given vitamins.”

Some patients with severe conditions are referred to the MSF-supported Abs hospital.

“We are seeing a high number of referrals,” says Tareq Farhan. “Many were afraid of going to hospitals because of COVID-19 and their illnesses worsened. We can’t treat them here; they require hospital attention.”

Many cases arriving at the hospital are related to malnutrition caused by other conditions that weren’t properly treated in time. This is what happened to Al Anoud, a nine-month-old baby girl from Aslam district, around 20 kilometres away. Her grandmothers are in Abs to take care of her. Her father has to tend to the few sheep that allow the family to make a living  and her mother is pregnant and has trouble moving.

“Al Anoud was first taken to a local health post where she didn’t receive adequate treatment and ended up being transferred to the Abs hospital,” one of the grandmothers explains. “She is being treated for severe malnutrition, septicaemia and pneumonia. She is still hospitalised but after six days of treatment her condition is slowly improving.”

Abs hospital is a long way from the family’s hometown.

1/2 Fatma Ziyad is from Khudish and is pregnant with her seventh child.
“I came for a check-up as it was experiencing some problems with my pregnancy,” she says. “@MSF people told me I need a monthly check-up, where I will also be given vitamins.” #Abs #Hajja #Yemen pic.twitter.com/Szp2rQeivW

“It took us three hours to arrive at the hospital and we had to do it with a private car, which is very expensive,” the grandmother says. “Taking the bus would have meant having to walk through mountains and valleys to reach the main road and then waiting; Al Anoud’s condition could not wait.”

Paulo Milanesio, MSF’s project coordinator in Abs, says this is a typical case.

“We had these situations before, but the pandemic has exacerbated the late arrival of patients, especially children. They arrive with worsened conditions because their families are waiting too long to come,” he says.

“For months, we saw our attendance rates decreasing and now many of those families who were afraid of COVID-19 are coming when the conditions of their relatives are very bad. It makes treatment more complex. We just hope people see that coming to hospital is safe and come on time to seek treatment for their relatives.”