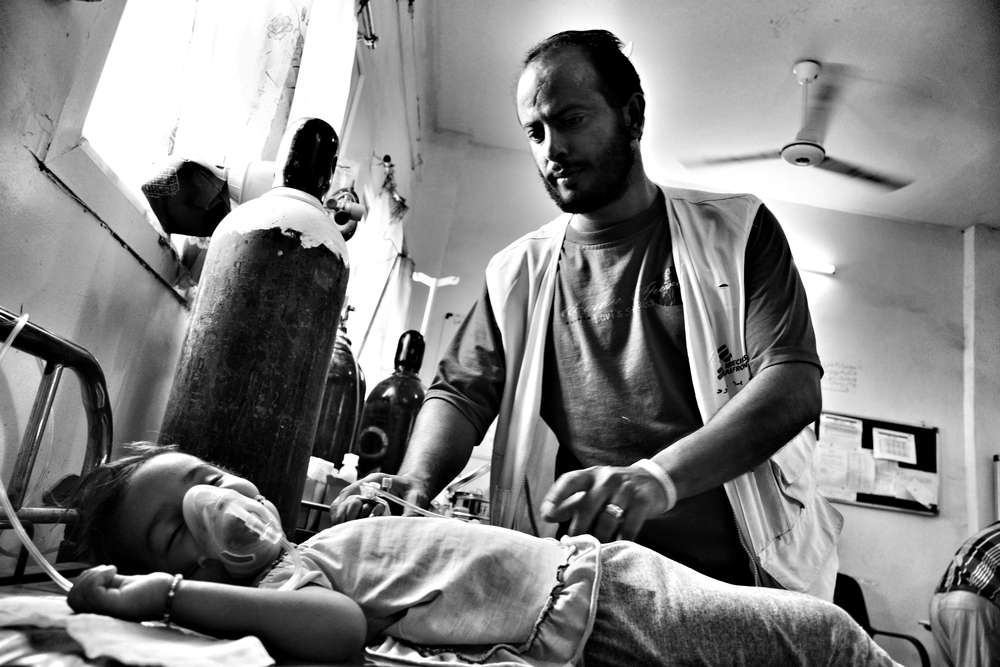 Despite the evacuation of MSF teams, medical activities will continue at these hospitals, although in a reduced capacity.

Following the 15 August aerial bombing of Abs Hospital in Yemen’s Hajjah Governorate, which killed 19 people and injured 24, Médecins Sans Frontières/Doctors Without Borders (MSF) has decided to evacuate its staff from the hospitals it supports in Saada and Hajjah governorates in Northern Yemen, concretely Haydan, Razeh, Al Gamouri, Yasnim hospitals in Saada and Abs and Al Gamouri hospitals in Hajjah.

The attack on Abs hospital is the fourth and deadliest on any MSF-supported facility during this war and here have been countless attacks on other health facilities and services all over Yemen.

GPS coordinates shared with all parties

Since the suspension of the peace talks between the Saudi-led coalition (SLC) and the Houthi forces in Kuwait 11 days ago, the SLC has resumed an intensified campaign in north Yemen.

Over the last 8 months, MSF has met with high ranking SLC officials on two occasions in Riyadh to secure humanitarian and medical assistance for Yeminis, as well as to seek assurances that attacks on hospitals would end.

Aerial bombings have however continued, despite the fact that MSF has systematically shared the GPS coordinates of hospitals in which we work with the parties involved in the conflict.

Coalition officials repeatedly state that they honour international humanitarian law, yet this attack shows a failure to control the use of force and to avoid attacks on hospitals full of patients.

MSF is neither satisfied nor reassured by the Saudi-led coalition's statement that this attack was a mistake.

Scenes from the immediate aftermath of the airstrike on Abs hospital, at 15:45 local time, 15 August 2016.

Unsafe for patients and staff

Given the intensity of the current offensive and our loss of confidence in the Coalition’s ability to avoid such fatal attacks, MSF considers that the hospitals in Saada and Hajjah governorates are unsafe for both patients and staff.

The decision to evacuate the staff, which include obstetricians, pediatricians, surgeons and emergency room specialists, from a project is never taken lightly, but in the absence of credible assurances that parties to a conflict will respect the protected status of medical facilities, medical workers, and patients, there may be no other options. This is the case in Hajjah and in Saada governorate based on recent events.

While an independent investigation remains necessary, we must highlight that previous military coalition investigations related to MSF facilities have not been shared with us.

“This latest incident shows that the current rules of engagement, military protocols and procedures are inadequate in avoiding attacks on hospitals, and need revision and changes,” says Joan Tubau, the General Director of MSF.

“MSF asks the Saudi-led Coalition and the Governments supporting the Coalition, particularly US, UK and France, to ensure an immediate application of measures geared to substantially increasing the protection of civilians”.

Mohammed Sanabani/MSF
The MSF team conduct a medical checkup on a child in Abs hospital on 12 June 2016.

MSF deeply regrets the consequences of this evacuation

The hospitals that MSF supports in Saada, Haydan, Razeh , Abs, Yasnim, and Hajjah will continue to operate with the staff from the Ministry of Health (MoH) and volunteers.

These hospitals are already struggling to keep up with the medical needs caused by the renewed bombing campaigns and the acute needs created or exacerbated by the numerous shortages Yemenis are trying to endure.

MSF asks all parties to ensure the safety of these hospitals and to allow them continue to provide medical care with neutrality and impartiality.

MSF deeply regrets the consequences of this evacuation for our patients and our MoH Yemeni medical colleagues who will continue to work in the health facilities under unsafe conditions.

We hope that the security situation will improve so that the population will have some respite and MSF teams will be able to return to providing the much needed medical care.

MSF regrets the collective failure to protect the Yemeni civilians from military action and also the failure to help them with adequate humanitarian response.

MSF condemns the way all involved actors, the SLC, the Houthi and their allies, are conducting this war and carrying out indiscriminate attacks without any respect for civilians.

MSF wants to once again offer its most sincere condolences to the families of our staff and the patients that died during the attack.

That medical staff and sick and injured people are killed inside a hospital speaks of the cruelty and inhumanity of this war.

Before this evacuation, MSF was active in 11 hospitals and health centers in Yemen, and providing support to another 18 hospitals or health centers in eight governorates: Aden, Al-Dhale’, Taiz, Saada, Amran, Hajjah, Ibb and Sana’a. More than 2,000 MSF staff are currently working in Yemen, including 90 international staff.