Scroll
13 Sep 2016
Share
Print:
Last year our teams vaccinated over 1.5 million people against measles. But the highly contagious viral disease remains one of the leading killers of young children.

Measles is one of the leading causes of death among young children.

It is a highly contagious viral disease. A safe and effective vaccine has existed since the 1960s but outbreaks still occur due to ineffective or insufficient immunisation programmes.

While global measles deaths have decreased by 71 percent worldwide in recent years – from 542,000 in 2000 to 158,000 in 2011 (according to the World Health Organisation) – measles is still common in many developing countries, particularly in parts of Africa and Asia.

Severe measles is more likely among malnourished children under five years old. Those with insufficient vitamin A, or whose immune systems have been weakened by HIV/AIDS or other diseases are especially likely to contract the virus.

Hover over the image below for an interactive guide to measles 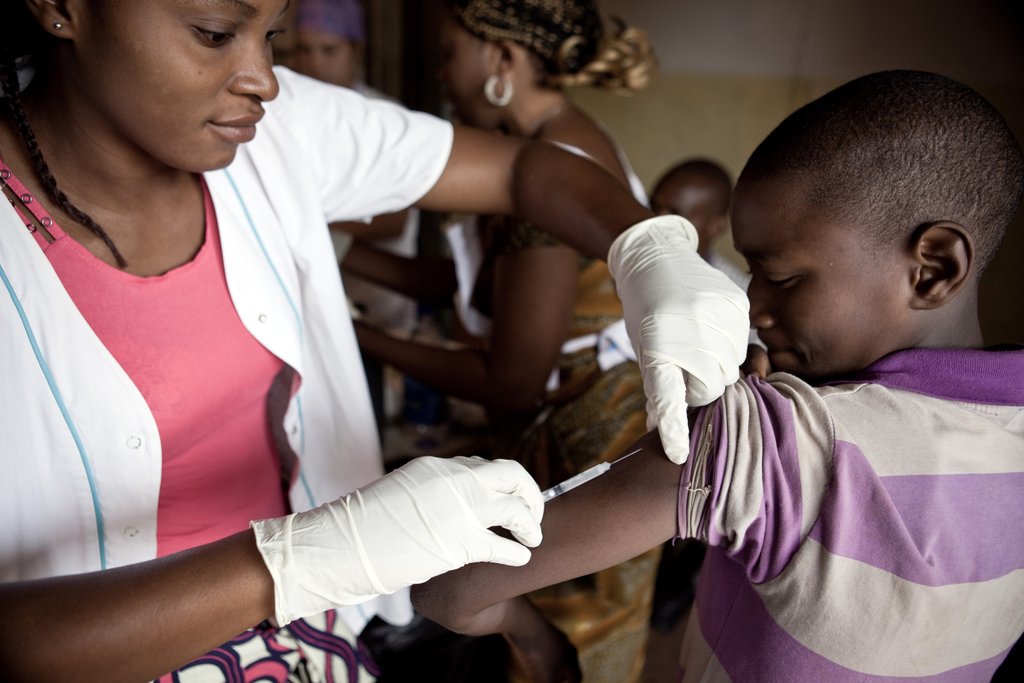 Measles is caused by the highly contagious measles virus. It is so contagious that 90 percent of people without immunity who share living spaces with an infected person will catch it. Measles is transmitted via droplets from the nose, mouth or throat of infected people, by coughing, sneezing and breathing.

Symptoms appear between 10 and 14 days after exposure to the virus and include a runny nose, cough, eye infection, rash and high fever.

There is no specific treatment for measles – patients are isolated and treated for a lack of vitamin A, eye-related complications, stomatitis (mouth ulcers) dehydration through diarrhoea, protein deficiencies and respiratory tract infections.

Clinical diagnosis of measles requires a history of fever of at least three days, with at least one of the three ‘C’s (cough, catarrh, conjunctivitis) present.

Clusters of tiny white spots on the inside of the mouth, known as Koplik spots, are also a sign of measles. These usually occur two days before the outbreak of the measles rash itself.

Most people recover within two to three weeks, but between five and 20 percent of people infected with measles die, usually because of severe complications such as diarrhoea, dehydration, encephalitis (inflammation of the brain) or respiratory infections.

A safe and cost-effective vaccine against measles exists, and large-scale vaccination campaigns have drastically decreased the number of cases and deaths from measles. However, coverage remains low in countries with weak health structures, or among people with limited access to health services and large outbreaks still occur.

Vaccination is the best form of protection against measles and even after the disease has begun to spread it can still reduce the number of cases and deaths. The difficulty lies in the fact that at least 95 percent of people need to be immune to prevent new outbreaks.

This page was last updated on 22 September 2016

MEDECINS SANS FRONTIERES - MIDDLE EAST is part of a global network delivering medical aid where it is needed most. Independent. Neutral. Impartial.