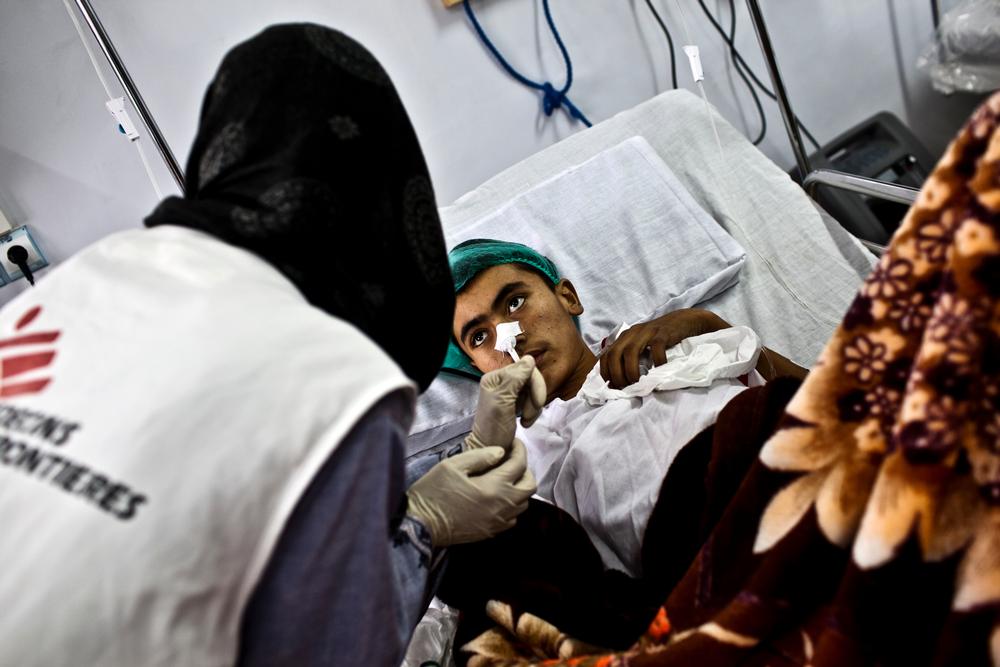 Opinion and debate: Jonathan Whittall, Dr Mit Philips and Michiel Hofman discuss 'resilience' - a new buzzword of a floundering aid system, but the concept of ‘building resilience’ is often at odds with a core humanitarian approach to crises taken by MSF.

The word resilience means everything to everyone. It is a new buzzword of a floundering aid system, pushed by donors increasingly looking for cost effectiveness and a way to marry all components of aid to a process of state building.

Over the past 10 years, Médecins Sans Frontières/Doctors Without Borders (MSF) has progressively seen a reduced capacity amongst the aid community to respond to emergencies.

Recently we have been forced to invest more and more in our own capacity to do water and sanitation in emergencies – something that previously would have been handled by other organisations rapidly responding and working alongside MSF.

However, we increasingly find ourselves alone in some of the biggest humanitarian crises – while aid agencies sit on the peripheries talking about building resilience, but doing nothing.

In a review of the concept of resilience done by MSF – the following was used as a working definition: “Resilience of a particular system (household, community) includes: Capacity to anticipate and prepare for a shock or stress; Capacity to absorb, accommodate stress or destructive forces through resistance or adaptation; Capacity to manage, or maintain certain basic functions and structures, during disastrous events; Capacity to recover or ‘bounce back’ after a shock or stress (in a timely and efficient manner).”

The concept of ‘building resilience’ is often at odds with a core humanitarian approach to crises taken by MSF.

Initially the concept of resilience was about recovering from shocks, ‘bouncing back’ and resisting future shocks. And as such, the notion of resilience has been touted as a concept that can bridge the gap between ‘humanitarian response’ and development aid.

However, we see three main problems with this.

Robin Meldrum/MSF
In the paediatric ward of Niangara hospital, Democratic Republic of Congo.

The problems with the state

In many of the conflict environments in which MSF works – the state is a party to the conflict.

If the idea in such an environment is to bring humanitarian aid and development aid closer together – this is not so different from what MSF has seen in Afghanistan where humanitarian aid is being used as part of a ‘stabilisation’ strategy.

So the question therefore becomes, whose resilience will the aid community build? And who will be excluded? Will UK-funded organisations seek to build the resilience – and therefore the capacity of local authorities – in a Taliban controlled village of Afghanistan?

Humanitarian and development aid are deliberately in contradiction, so any concept aimed at bring the two goals closer together will be problematic: humanitarian aid kicks in when there is no longer a system to develop.

And more than that, humanitarian aid is aimed at the most vulnerable (impartiality), which is exactly those people and those populations that are not resilient enough to cope by themselves.

“An excuse for inaction”

Secondly, a focus on resilience represents a shift in the aid community at a time of financial crisis towards a ‘value for money’ approach.

But when a response becomes a mixture of ‘all things to everybody’, about saving lives, building capacity, reducing vulnerability and ensuring sustainability – often the basics are overlooked, and there is a danger that ‘building resilience’ becomes an excuse for inaction on the basics of saving lives and alleviating suffering.

In the Democratic Republic of Congo, suspending patient payment during malaria outbreaks is seen as undermining the community’s ability to take responsibility for their health. Rapid vaccination campaigns are frowned upon because support to local health structures could do the job instead, even if it means delays in epidemic control and overall less children protected.

Thirdly, there is also an issue with accountability on effectiveness of aid.

Increasingly, and rightly so, humanitarian aid is expected to be evidence driven, benefiting from lessons learned and evaluations.

Priority interventions and strategies are chosen on the basis of their ability to prove an impact on the survival and wellbeing of populations in crisis.

In contrast, beyond a concept, resilience has little to offer in terms of evidence on what interventions/strategies would be effective – or rather- better than the current effective ones.

The danger is that practice is going to be driven by what seems at this point an appealing political concept, without a real wish to measure objectively its benefits and relatively blinded to its possible negative effects.

Humanitarian aid targets those individuals that are the least resilient, at a time that systems are becoming less, not more sustainable. For that reason, humanitarian aid should be left purposely outside comprehensive approaches, integrated solutions and sustainability or resilience objectives.

All these may be very laudable goals, but humanitarian aid is purposely limited, in time, in place, and in who it targets.